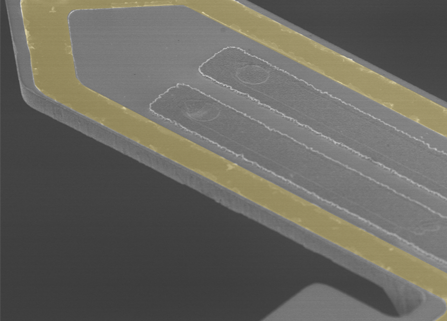 Cathode catalyst layers in fuel cell technology consist of platinum nanoparticles embedded in a carbon matrix, Pt(C). If the carbon matrix in a film is diamond-like, the electron transport is dominated by tunneling between neighboring platinum particles. Consequently, the film is insulating at low platinum particle density.
In an SEM these nanogranular films can be modified by focused electron beam induced processing (FEBIP). Upon electron beam irradiation carbon is oxidized by oxygen from residual water and released from the matrix. As a result, the matrix becomes more compact, thus reducing the distance between the metallic nanoparticles. At the same time, the structure of the carbon can be changed to a graphite-like structure, which is intrinsically conductive. Both the closer distance between Pt nanoparticles and the formation of graphite-like entities gradually increase the conductivity of a Pt(C) film.
With AFSEM™ the gradual increase of conductivity can be studied directly between the irradiation steps, without sample transfer. Since the measurements are performed in the vacuum of the SEM, contamination issues that are generally encountered in air are reduced.

For such measurements the AFSEM™ works with conductive, self-sensing cantilevers with sharp, solid platinum tips. The platinum tips are grown by focused electron beam induced deposition. A gold lead connects the tip to a current amplifier.

With AFSEM™ the gradual effect of the irradiation dose on topography and conductivity can be measured in-situ, without sample transfer. AFM topography of a Pt(C) film modified with FEBIP at different doses (left). The reduction of height shows the compacting of the film with irradiation dose. At the same time, an increase in local conductivity was observed at higher doses.

We use cookies to ensure that we give you the best experience on our website. If you continue to use this site we will assume that you are happy with it.

We may request cookies to be set on your device. We use cookies to let us know when you visit our websites, how you interact with us, to enrich your user experience, and to customize your relationship with our website.

Click on the different category headings to find out more. You can also change some of your preferences. Note that blocking some types of cookies may impact your experience on our websites and the services we are able to offer.

These cookies are strictly necessary to provide you with services available through our website and to use some of its features.

Because these cookies are strictly necessary to deliver the website, refuseing them will have impact how our site functions. You always can block or delete cookies by changing your browser settings and force blocking all cookies on this website. But this will always prompt you to accept/refuse cookies when revisiting our site.

We fully respect if you want to refuse cookies but to avoid asking you again and again kindly allow us to store a cookie for that. You are free to opt out any time or opt in for other cookies to get a better experience. If you refuse cookies we will remove all set cookies in our domain.

We provide you with a list of stored cookies on your computer in our domain so you can check what we stored. Due to security reasons we are not able to show or modify cookies from other domains. You can check these in your browser security settings.

These cookies collect information that is used either in aggregate form to help us understand how our website is being used or how effective our marketing campaigns are, or to help us customize our website and application for you in order to enhance your experience.

If you do not want that we track your visist to our site you can disable tracking in your browser here:

We also use different external services like Google Webfonts, Google Maps, and external Video providers. Since these providers may collect personal data like your IP address we allow you to block them here. Please be aware that this might heavily reduce the functionality and appearance of our site. Changes will take effect once you reload the page.