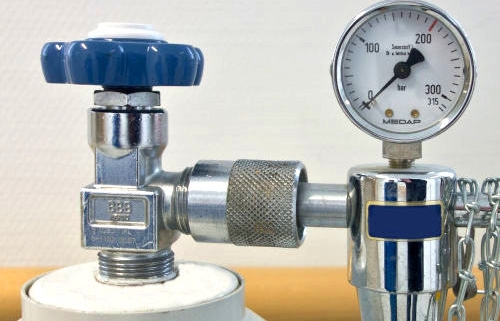 In this application Mr. Badarlis (Aristotle University of Thessaloniki) and his colleagues developed a gas cell setup for measurement of gas density and viscosity by using a SCL micro-cantilever beam (PRSA-L300-F50). In parallel, the validity of a proposed modelling approach was evaluated.

The density and viscosity of gases are orders of magnitude lower than liquids. For this reason, the use of a very sensitive sensor is essential. Although the used cantilever was designed to work with thermal activation, it was activated with an electromagnetic force. Therefore, the heater structure on the cantilever was driven with an alternating current and the cantilever itself was placed in front of a permanent magnet. The deflection of the cantilever beam was detected by an integrated piezo-resistive sensor on the cantilever.

Photo of the gas cell developed by Mr. Badarlis. The micro-cantilever beam and its silicon chip are mounted on a small 5x6mm PCB. In addition, the magnet as well as a pressure, a temperature and a humidity sensors are shown.

Schematic diagram of the experimental gas measuring setup based on a micro-cantilever.

We use cookies to ensure that we give you the best experience on our website. If you continue to use this site we will assume that you are happy with it.

We may request cookies to be set on your device. We use cookies to let us know when you visit our websites, how you interact with us, to enrich your user experience, and to customize your relationship with our website.

Click on the different category headings to find out more. You can also change some of your preferences. Note that blocking some types of cookies may impact your experience on our websites and the services we are able to offer.

These cookies are strictly necessary to provide you with services available through our website and to use some of its features.

Because these cookies are strictly necessary to deliver the website, refuseing them will have impact how our site functions. You always can block or delete cookies by changing your browser settings and force blocking all cookies on this website. But this will always prompt you to accept/refuse cookies when revisiting our site.

We fully respect if you want to refuse cookies but to avoid asking you again and again kindly allow us to store a cookie for that. You are free to opt out any time or opt in for other cookies to get a better experience. If you refuse cookies we will remove all set cookies in our domain.

We provide you with a list of stored cookies on your computer in our domain so you can check what we stored. Due to security reasons we are not able to show or modify cookies from other domains. You can check these in your browser security settings.

These cookies collect information that is used either in aggregate form to help us understand how our website is being used or how effective our marketing campaigns are, or to help us customize our website and application for you in order to enhance your experience.

If you do not want that we track your visist to our site you can disable tracking in your browser here:

We also use different external services like Google Webfonts, Google Maps, and external Video providers. Since these providers may collect personal data like your IP address we allow you to block them here. Please be aware that this might heavily reduce the functionality and appearance of our site. Changes will take effect once you reload the page.